PIONEERS (Protective Innovations of New Equipment for Enhanced Rider Safety) is a European project aimed at reducing the number of Powered Two-Wheeler (PTW) rider fatalities and severely injured riders by placing the emphasis on safety, performance, comfort, and usage rate of Personal Protective Equipment (PPE), together with the development of new on-board safety devices.

Applus+ IDIADA has played a key role coordinating the whole project, ensuring its successful execution through professional and effective management in order to achieve the project’s objectives. Moreover, Applus+ IDIADA has led a Work Package whose main objective is the transfer of results from other work packages into reliable test methods, and the associated assessment to ensure the protection of the user with the best balance between testing repeatability, reproducibility, and reliability.

The PIONEERS project has made a detailed analysis of more than 1,400 real, serious accidents involving powered two-wheeler riders with the aim of better understanding the factors that generate the most injuries.

Various safety devices have been tested during the project and, although some of these elements are still in the pilot phase and are not yet available on the market, the research concludes that the deployment of these accessories could contribute to reducing, under certain conditions, up to 24% of rider deaths. At the same time, at a European level and in a period of 5 years, a saving of up to 140 million euros could be obtained for the administrations.

The initiative was launched in 2018 and is led by a consortium made up of 16 international partners, two of which are Spanish entities: Applus+ IDIADA, a specialist in vehicle design, engineering, testing and homologation, and RACC, a Mobility Services Club. The other participating entities are five universities (Florence, Strasbourg, Munich, Darmstadt and Gustave Eiffel University in Paris), two research centres (BASt in Germany and Neura in Australia), one industrial company (Bosch), four equipment manufacturers (Dainese-AGV, Alpinestars, Rev’it and Motoairbag) and two motorbike manufacturers (Piaggio Group and Ducati).

The objectives of the PIONEERS project

In order to reduce the number of rider fatalities, PIONEERS proposes the need to improve user safety from an integrated perspective, i.e., it refers to both personal protective equipment and accessories that are integrated into the vehicle. Thus, the European consortium has focused on four complementary aims:

Solutions developed within the project aimed at improving rider safety

During the second half of the PIONEERS lifespan, the project has developed the solutions that have been identified in the first half.

One of the four main pillars of the PIONEERS project was to develop a new set of Personal Protective Equipment (PPEs) for motorcyclists, which exceed the current state-of-the-art. The four industrial partners of the project worked in parallel tasks within WP4, each aiming at developing enhanced PPEs for the four main regions of the human body addressed by the project, which are head, upper torso, pelvis and lower legs.

DAINESE developed novel energy absorbing concepts for the manufacture of helmet liners with advanced brain protection. The technologies explored were 3D printing and the use of modular structures made with more conventional and cost-effective manufacturing processes. A replacement for standard EPS liners was sought. These liners have two fundamental limitations which were addressed with the new technology: they are unable to efficiently manage impacts that cause sudden and dangerous rotations of the head and they are not breathable.

REV’IT! developed a protective inflatable, as well as the garment to accommodate this PPE, aimed at improving the brand’s state-of-the-art in thorax protection. Throughout the development process different manufacturing methods, technologies, structures, and airbag designs were investigated to optimize the protective performance of the inflatable. This process resulted in an airbag system incorporated in a comfortable garment. The PPE complies with the applicable European standards for both airbag and motorcycle apparel.

MOTOAIRBAG developed a new airbag for thorax protection. The focus was on enlarging the use of protective airbag meeting EU standard. End user price, user-friendliness, high protection, reliability and comfort guided the development. A complete working prototype was produced and passed the EU protective requirements.

DAINESE developed a new concept of protection for the pelvis. Motorcycle crashes are the most common cause of traumatic urogenital injury, but there are no countermeasures for their prevention. The solution explored the protective potential of technical clothing against soft tissue injuries caused by the fuel tank in the genital area.

ALPINESTARS developed a touring boot prototype with improved protective performances. After having selected the technical features to be enhanced, the development consisted of the design of the impact absorption elements and the internal ankle structure. The constructed prototype has been tested against impacts on ankle and shin, inversion/eversion, and flexion/extension. The results have been compared with the ones of the most widespread touring and sport boots.

PIAGGIO developed a Safety Leg Cover from the same concept of the genuine standard leg covers by simply adding two or three protective items fixed inside the cover, matching the legs position. Such elements are solid or articulated bars made of materials characterized by the following features: lightness, high absorbing power, low memory, quick reshape performance.

DUCATI developed a motorcycle side airbag from the preliminary idea of an effective way to reduce riders’ common leg injuries in lateral impacts with cars. It is worth mentioning that no motorcycle model equipped with a side airbag protection system is available on the market yet. The knee airbag modules were fitted on a Ducati Multistrada vehicle taking into account the layout of the other parts, such as exhaust system, engine and fairings.

On 29th September, in Barcelona, the closing ceremony of the European PIONEERS project was held, in which all the consortium members met with other international organizations with the aim of increasing safety and reducing the number of deaths and serious injuries in motorbike accidents. This initiative, which was launched in 2018, has received funding from the European Union under the Horizon 2020 programme, with a total budget of 4.83 million euros. The research concludes that if the initiatives developed in the framework of the study are implemented, under certain conditions, the number of motorbike accident victims could be reduced by up to 19%. 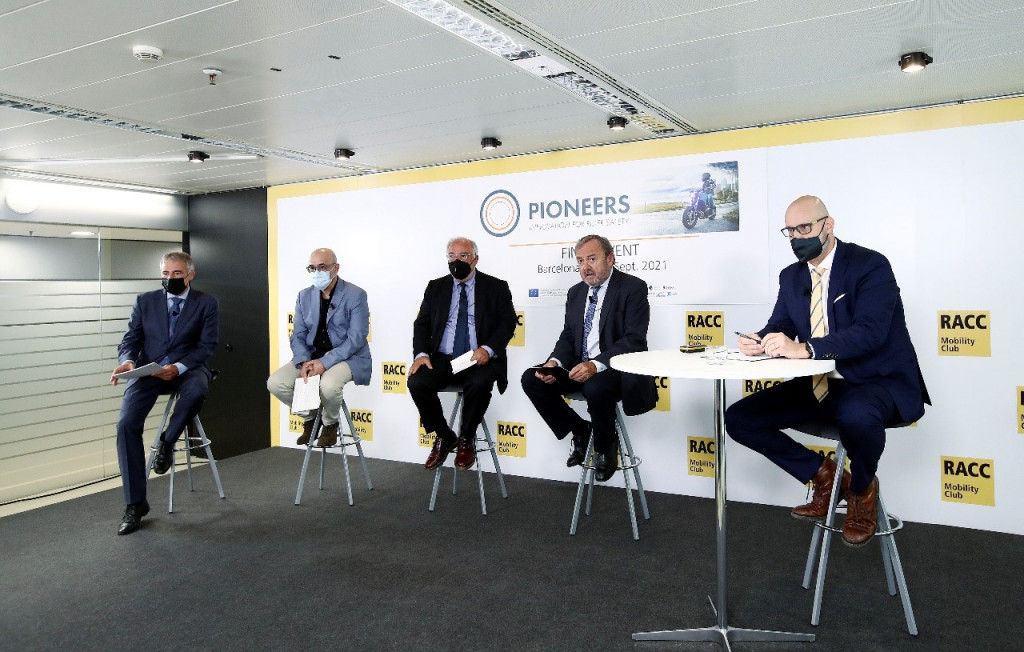 The open activity was focused on three acts:

In this activity, Enric Soriano (PIONEERS Project coordinator) introduced the project and left the floor to Ignasi Ferrer (Innovation Director from Applus+ IDIADA), who explained the importance of these types of projects and encouraged the EC to continue investing in riders’ safety.

In the afternoon session, PIONEERS Work Package leaders explained the main results of the Project. At the end of the presentation some physical prototypes were shown and explained in detail.