Traditionally, car manufacturers have worked to improve the road safety of their vehicles. This comprises both active safety – all of the elements that contribute to greater efficiency and stability when the vehicle is in motion in order to avoid an accident – and passive safety – those elements that minimise the damage that can occur when an accident is inevitable.

In recent years, Applus+ has developed a new testing and approval technique to reduce damage to a very vulnerable area – the driver’s head. In passive safety crash tests, for example, the dummy’s head contacts a solid object, provoking hard contact that could cause a head injury. Although useful as a basic restraint system, the airbag blocks the visibility of any such contact with hard objects in the test film. Instead, head sensors are used to determine if there was head impact during the crash test. These accelerometers detect whether or not the head has made contact. Where there is no impact, the minimum distance between the head and the closest solid car part is important in configuring the restraint system to minimise chest injury, for example.

To improve and compare different restraint system configurations during component development, engineers analyse the minimum distance between the head and the rigid parts of the car. This is calculated using photogrammetry, which provides information about the position of the head relative to the object, tracked by high-accuracy algorithms. A scanner is used to acquire a 3D mesh of the objects and the minimum distance between the meshes is then analysed. 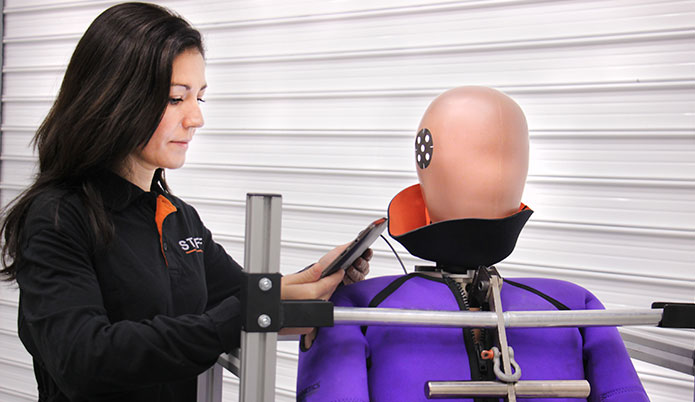 Photogrammetry and tracking technologies are a highly accurate alternative to accelerometer-instrument sensors for calculating the distance between a crash test dummy and objects or vehicle interior parts. Photogrammetry is used to calculate a point’s real-world position on an image, while the tracking system uses algorithms to follow points and keep the same centre point in each movie frame. A software application then combines these two elements to provide position, velocity, acceleration and angles of the points on the 3D axis.

The tracking technology can be used to analyse the head impact criterion (HIC) against internal structures and objects (e.g. pole). Using internal sensors for this kind of analysis offers only a yes/no response, whereas tracking can provide the exact distance between the head and the interior components. For example, the use of tracking technology on a frontal crash test provides the distance between the dummy’s head and the steering wheel. Knowing these distances and the resultant forces from the sensors means that improvements can be made to the restraint system in order to decrease the pressure from the system itself.

Photogrammetry and motion analysis are an increasingly important tool in analysing crash and sled tests for occupants and car structures. The minimum distance between the head and rigid parts of the car methodology is an important element in developing and comparing different configuration tests and restraint systems.